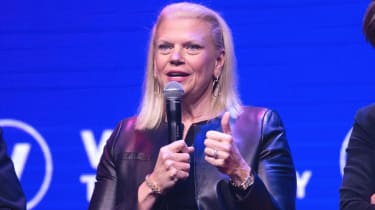 IBM boss Ginni Rometty has warned that new technologies could create an 'era of job exclusivity' if people aren't prepared for the digital future of the workplace.

The CEO suggested creating "new collar" jobs where people wouldn't be required to have a four-year degree for their future careers.

Rometty made the comments on stage at Boxworks, during CEO Aaron Levie's keynote in which the pair chatted over the current trust issues with technology companies.

She said that one of the issues around trust is preparing people to live in the digital era and avoiding technological exclusion.

"If we don't do something this is not going to be an inclusive era," she said. "This is true in every country, in the United States, all the riches can not go to the west and the East coast. If people look at the future and say 'this technology is great but I don't have a better job' then that isn't going to be good for anyone."

Jobs losses to AI and automation is a talking point without an end, mostly because there's no definitive answer on when and how much is going to go to machines and software.

Seemingly speaking for all technology companies, Rometty said that it's their job to help deal with the fallout of this. She said: "I feel like as a company if I'm going to build this technology I've got to bring it in safely into this world.

"We're working with 500 other companies on the idea that you don't have to have a four-year degree to live in this digital era and have a good job. We've coined something called 'New collar', not in the negative way of white or blue-collar, it would be that you could get a really great paid job in cloud, security, or data."

This isn't an IBM initiative per se, but a collective venture where companies help the poorest performing four-year high schools in the US and enable students to learn and gain practical digital skills.

It's crucial that this work is done now, as technologies such as cloud computing are rapidly growing and splitting into highly specialised sub-parts in most businesses. Rometty pointed out that a big challenge in this area will be getting to grips with not only the different systems within a cloud infrastructure but the various cloud infrastructures themselves as more and more businesses move towards hybrid models.