Microsoft and Sony partner on cloud-based gaming and tech development 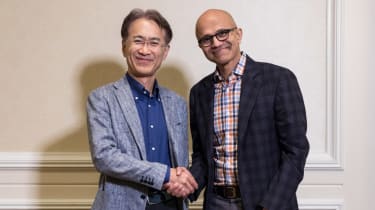 Despite being rivals in the gaming world, Microsoft and Sony have entered into a partnership to work on cloud technology to support game streaming and AI services.

Both companies have signed a memorandum of understanding which will see them jointly work on future cloud services based on Microsoft's Azure infrastructure that will support more "enhanced entertainment experiences", notably centred on streaming content and games.

The partnership is an odd one at first glance, given Microsoft's Xbox division is a direct rival to Sony's PlayStation business. Sony also has an existing game streaming service, PlayStation Now, and Microsoft is poised to launch its own offering with xCloud.

At a base level, Sony could boost its PlayStation Now service with the reach and power of the Azure cloud, while Microsoft could gain another major customer on its world-spanning infrastructure.

But the partnership looks to be more about exploring and developing cloud technologies with Microsoft noting that it will involve "building better development platforms for the content creator community".

Sony's chief executive, Kenichiro Yoshida, acknowledged the rivalry between the two companies, but painted the partnership as one that will be more focused on the exploration and creation of new technologies.

"For many years, Microsoft has been a key business partner for us, though of course the two companies have also been competing in some areas. I believe that our joint development of future cloud solutions will contribute greatly to the advancement of interactive content," said Yoshida. "Additionally, I hope that in the areas of semiconductors and AI, leveraging each company's cutting-edge technology in a mutually complementary way will lead to the creation of new value for society."

Speaking of semiconductors and AI, the partnership will see the joint development to new intelligent image sensor technology, tapping into Sony's work on image sensors for cameras combined with Microsoft's Azure-based AI technology.

This proposed work will not only involve Microsoft and Sony creating semiconductors and services that can be incorporated into their own products and services, notably cloud and edge computing systems, but will also be aimed at producing products for enterprises to use.

Furthermore, the joint venture will also explore how Microsoft's AI platform and tools can be integrated into Sony's consumer products to create "highly intuitive and user-friendly AI experiences".

By working together both companies could improve their overall gaming, cloud-based service, and smart tech portfolios. And while details of how exactly this will work are vague, it could see the development of new technologies that have an immediate benefit to both companies' consumer customers and yield benefits for their enterprise customers later on down the line.

VDI vs DaaS: the flavors of desktop virtualization

VDI vs DaaS: the flavors of desktop virtualization