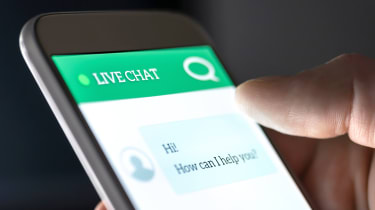 Microsoft has announced the launch of a fully managed service that allows developers to add an array of communication tools to existing applications in a bid to help improve how businesses connect with their employees and customers.

Described by Microsoft as a first of its kind from a major cloud provider, the fully managed service, dubbed Azure Communications Service, lets businesses add voice and video calling, SMS text messaging, and instant chat support to mobile, desktop, and web apps, regardless of platform or device.

It's currently possible for developers to add chat capabilities to existing applications, for example, by using Azure Functions. However, this is a fairly lengthy and laborious process involving sourcing code from GitHub and manually testing the application.

Microsoft claims the new set of APIs cuts much of the complexity out of the process, allowing for new integrations to be created "in a matter of minutes" using "just a few lines of code".

Perhaps its biggest selling point is that these functions can then be integrated alongside other Microsoft services, including Azure Cognitive Services. This means businesses will be able to deploy tools like sentiment analysis and translation on top of any chat functions they add to their apps.

New chat functions will also benefit from any tools the base application has access to, which could be particularly powerful if those apps already have access to wider business operations, such as the company's website.

Azure Communications Service will run off the same global network that underpins Microsoft Teams, the company added, allowing for much of the backend work and ongoing maintenance to be handled entirely by Microsoft.

Microsoft also confirmed that all communications, regardless of how they are delivered, will be encrypted and adhere to GDPR and similar frameworks.

The Azure Communications Service is the latest move from Microsoft to try and expand its footprint across business communications, having already opened up Microsoft Teams to third-party applications – apps that customers may have been reluctant to abandon in favour of Teams.

According to Nick McQuire, senior vice president of Enterprise Research at CCS Insight, Microsoft has managed to position itself as a major player in what is traditionally a telecommunications role.

"Azure Communications Services takes all the experience Microsoft has gained from its remote development and communications solutions during the pandemic and turns them into key developer services," said McQuire.

"The shift to remote everything during the pandemic has meant that developers are now more attracted by communications-based features in their applications. It's an area of opportunity that telcos worldwide have failed to grasp over the past few years and above all, shows that Microsoft has ascended to become one of the world's most important communications companies as well."

Voice and video calling and live chat functionality are available today, and support for both SMS text messaging and dedicated phone numbers will arrive in October.