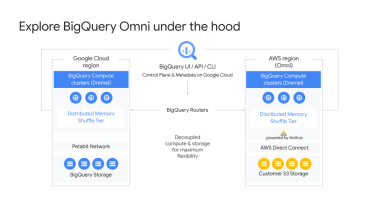 Google has launched an early version of BigQuery Omni, its new analytics tool that lets users access and view data across Google Cloud and Amazon Web Services without leaving the Big Query UI.

Powered by Google Anthos, its vendor-neutral app development platform, users will be able to use SQL and the standard BigQuery APIs to manipulate data silos sourced from multiple platforms, without having to manage the underlying infrastructure.

Although the initial alpha launch of the service is restricted to Google Cloud and AWS, Google has also confirmed that Microsoft Azure will eventually be supported.

The tool has been designed to target those customers who rely on multiple cloud service providers and are forced to juggle and consolidate a number of analytics tools in order to get a view of their data.

This is made possible by the decoupling of storage and compute, according to the firm. The compute side has always been regarded as ‘stateless’ but, until now, BigQuery required data to be stored in Google Cloud – this restriction has now been scrapped, allowing customers to store their data in any supported public cloud.

This single view means that customers can use BigQuery Omni to run SQL queries on clusters in whichever region the data resides. For example, it will be possible to query Google Analytics 360 Ads data stored in Google Cloud while simultaneously querying logs data from any apps stored in AWS S3. This can then be used to build a dashboard to get a complete view of audience behaviour alongside ad spend.

This means customers can avoid any costs associated with moving or copying data between cloud platforms in order to get a full view, Google claims.

“As hybrid and multi-cloud adoption has become the norm, enterprises are increasingly looking for data products that provide a consistent experience and lower complexity of using multiple clouds, while enabling the ongoing use of existing infrastructure investments," he added.

Cloud vs on-premise storage: What’s right for you?

The new system is built using Anthos, an app development platform launched last year to appease customers that wanted a single programming model that allowed for data to be moved between their various cloud providers without charge or requiring changes.

The underlying infrastructure is run entirely by Google, including any communication between cloud providers, on the familiar BigQuery UI, so there will be little operational change from the customers’ perspective, the company claims.

BigQuery Omni’s engine will run on Anthos clusters inside the BigQuery managed service, and will source data from the various data silos across a customer’s public cloud services, provided they have provided authorisation. In order to run queries, data is temporarily moved from the cloud provider’s data storage to the BigQuery cluster running on Anthos.

For now, BigQuery Omni is only available in private alpha, so customers will need to apply to Google to use it if they’re interested. It’s also only available for AWS S3 for now, with Azure support coming soon.

There is currently no general release date available.