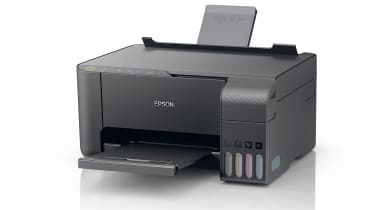 Epson's EcoTank ET-2710 is the least expensive MFP with refillable ink tanks that we've reviewed. Typically of such devices, it's basic: while it has wireless networking, its lack of a screen rules out more advanced functions. Instead, there's a smattering of icons and indicator LEDs to control simple tasks such as single-page photocopying - there's no counter to dial up multiple copies. Paper handling is limited to a simple 100-sheet input and a 30-sheet output and, if you want to print double-sided, you will need to do it manually.

The EcoTank ET-2710's lack of screen rules out advanced cloud functions such as scanning to or printing from an online file service, but the ET-2710 does support Google Cloud Print. This allows you to print from any device in any internet-connected location, although the price is that your document passes through Google servers.

Epson's revised, leak-proof ink bottles make the ET-2710 easy to set up - simply remove the lid, invert the bottle and place it over the relevant tank. Ingenious keying makes it impossible to mis-fill, while the tanks are spaced so that you can line up the black and magenta bottles at the same time, then swap for the blue and yellow. There's no squeezing, and the bottles take only a minute or so to disgorge. Once loaded with ink, there is a longer delay while the system primes, after which the tanks have room to accept the last few drops from the bottles.

A typical home user probably won't have to think about ink again for another couple of years, as the ET-2710 arrives with enough for 3,600 mono pages or 6,500 in colour. While you could buy a similarly basic MFP for 50 or less, you would need to spend a couple of hundred pounds on ink to match what's included here, making the ET-2710 excellent value overall. Helpfully, Epson includes a three-year extended warranty, so the MFP should last long enough for you to realise the savings. 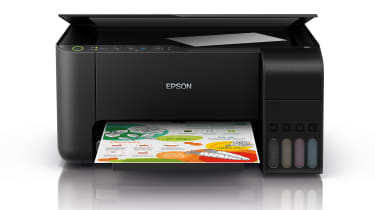 Even once you run out of the included ink, replacement bottles work out at less than 0.5p per page of mixed text and graphics, giving the EcoTank ET-2710 comfortably the lowest running costs we've seen from a printer in this class. You shouldn't be fooled into thinking it's a high-volume printer, however - it's not built for demanding office environments.

We've never spilled a drop from the revised version of Epson's EcoTank system, but the ET-2710 won't make a splash once it's up and running. It's a bit slow, delivering colour graphics at 2.9ppm and black text at just 9.6ppm - although this shot up to 16.1ppm in draft mode. Each borderless 10 x 15cm photo took more than two-and-a-half minutes, while two 10 x 8in shots took 18 minutes and 26 seconds that we're never getting back.

Scan speeds were similarly relaxed, with previews needing 11 seconds, a 300dpi A4 scan taking 25 seconds, and a 1,200dpi photo scan completing in just under a minute. We copied a mono page in 14 seconds and a colour one in 35 seconds.

Our results were generally good. Plain paper text and graphics were crisp and bold, although draft text was quite faint. Photocopies were faithful to the originals, while scans were excellent both for archiving documents and capturing photos at medium to high detail. The scanner did well in our tests to retain shade details among the lightest and darkest regions. By Epson's typically high standards, photo prints themselves were disappointing and lacked the company's characteristic accuracy in colour reproduction.

The ET-2710 isn't especially cultured. Its paper feed mechanism is noisy, making it tiring to share space with during longer print jobs, particularly faster ones such as text printing. Its paper input and output trays are basic, but although the latter is alarmingly flexible and lacks a paper stop at the end, printed pages remained tidy. The scan head moves with a classy and quiet whirr, but as the lid's basic hinges don't extend, you can't close it flat on a thick original such as a book.

Compare the ET-2710 to other 170 devices and you'll be disappointed, but it trounces entry-level MFPs and even high-volume laser printers for running costs. If you want a basic home MFP, don't need great photos and want to make the most of your money, it's worth its initial premium.

This A4 MPF’s slow speeds and lack of advanced features make it an imperfect fit for busy office workgroups, but for SOHOs or sole traders, its rock-bottom running costs make it an excellent investment.