Skip to ContentSkip to Footer
Opinion

The Man has ruined my Huawei P40

Why do fears about the Chinese government using 5G networks for espionage mean I can’t have Google apps?

In 2004, the Electoral Commission tried to encourage more people to vote with an advert that suggested you couldn’t really discuss anything if you were not interested in politics.

It was an animation of two ‘pals’ in a pub where one prevents a discussion about the European Parliament with the line “I don’t do politics”. From there, his opinions on roadworks, sports, price rises and even the last orders at the bar get shut down because “politics affects almost everything,” the advert so rightly tells us.

I think about this every time I get a new device from Huawei because I can’t talk about it without mentioning the reason it no longer has Google apps. I’ve been reviewing the company’s smartphones, laptops and tablets for a while now and I have developed a fondness for them. I have a P30 phone, I use a MateBook X Pro laptop, I write positive things about the hardware because I feel it's very, very good.

However, there’s now a predetermined fault with each new device, one all tech writers know about before unboxing any new Huawei phone. The devices can no longer support the Google Play store and its ecosystem of apps. No Gmail, no Google Maps, literally all the things you’ve come to depend on since phones became smart, because the US government has placed Huawei on a blacklist that prohibits all American firms from trading with it. Unfortunately, this includes Google, which is a US-based company.

The reasoning behind it is murky. Essentially, the Man believes Huawei is in cahoots with the Chinese government and its dominance in the 5G market will lead to state-sponsored surveillance. The evidence that supports this theory hasn‘t been made public, yet, but it has proven enough to pull Huawei into a bitter trade war between the US and China. It’s also seemingly substantial enough for US allies to ditch the embattled Chinese firm from their national networks – potentially including the UK.

The Man, in this case, is US President Donald Trump, an orange-faced crackpot who’s managed to fail his way into one of the most influential jobs in the world. On Tuesday he tweeted “LONE WARRIOR” without any explanation and that wasn’t even the strangest thing he’d posted during the week. All the really bizarre stuff got taken down by Twitter.

Now, I’m not suggesting that these claims are made up, or that the trade war is all based on some kind of bias against the Chinese – to say its government is authoritarian would be an understatement – but there does seem to be an unfair focus on Huawei. Worse, the sanctions actually hit the consumer and impact competition.

Until Huawei released the P20 and P20 Pro smartphones in 2018, the market was dominated by two manufacturers; South Korean giant Samsung and Silicon Valley stalwart Apple. The Galaxy range and the iPhone were in quite a comfy position until Huawei’s super camera phones came on the scene.

They followed this up with the P30 and P30 Pro in 2019. The latter had a camera with a mindblowing zoom capability. You could capture images from hundreds of yards away – strangely, no one thought that was a security issue – but these were launched just a month before big Don slapped the sanctions on the table.

I don’t mean to sound bitter, but why do we trust Huawei any less than Trump? He regularly refers to the coronavirus as the “Chinese virus” and other more racist terms. What’s more, the sanctions on Huawei were put in place far more easily than any regulatory action against America’s big tech firms. Facebook caused one of the biggest breaches of privacy and democracy the world has ever seen, but no government has managed to curtail its growth. Google, meanwhile, has slipped the net of many anti-competition and data privacy rulings.

To its credit, despite all the political pressure and a pandemic, Huawei has still managed to launch hardware. Its P40 Pro smartphone is marvellous and comes in a range of stylish shades, but it’s most notable for not having full-fat Google. If you want the apps, you need to sideload them, something both Huawei and Google (and IT Pro) do not recommend.

Secure files on your smartphone with Google Safe Folder

Secure files on your smartphone with Google Safe Folder

2030 vision: what will PCs look like in the next decade? 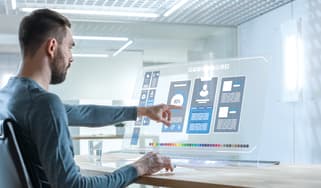 2030 vision: what will PCs look like in the next decade?

Is there still an app for that?

Is there still an app for that?