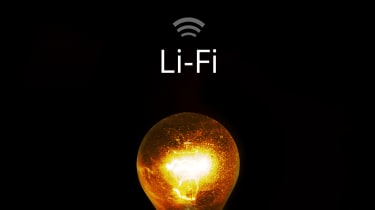 Light fidelity (Li-Fi) is a form of wireless communication technology that relies on light to transmit data.

The concept was first introduced by Professor Harald Haas as part of a TED talk in 2011, where he showed how it was possible to maintain high data speeds over the light spectrum.

The technology, considered part of the visual light communications (VLC) umbrella, has been designed as an alternative to Wi-Fi, which relies on radio frequency to transmit data, although some similarities exist such as data transmission being bi-directional.

It works by fluctuating the current going through an LED bulb, reducing and increasing its visible light at a speed far faster than the human eye is able to register. The fluctuating intensity of the beam is then picked up by a photoreceptor, which then passes its readings into a remote processor capable of converting the minute amplitude changes into a data stream. This data is then sent along to the various devices connected to the network.

The technology has some distinct advantages over Wi-Fi. First of all, Li-Fi is capable of sending data far faster than current technology with transfer speeds of up to 224Gbits/sec (more on that below). Not only that, the light spectrum is 10,000 times larger than radio frequency, meaning it's effectively impossible to reach its capacity.

Although visible light can't travel through walls, this makes it far more secure than Wi-Fi as access can be maintained within a secure environment. What's more, light can be bounced off walls and surfaces while still maintaining high speeds, so a direct line of sight is not always necessary.

Being able to get access to the internet via an LED light bulb sounds great, but users really only care about the speed and reliability of their network, along with the security of their connection. So how does Li-Fi stack up against common Wi-Fi?

In lab tests, Li-Fi connections have shown to be capable of reaching 224 Gbits/sec, although it's unlikely that these speeds will be replicated widely once the technology is rolled out. Still, that's significantly faster than the theoretical maximum speed of an 802.11ac Wi-Fi network, which is just under 7 Gbits/sec.

Even if Li-Fi's 224Gbits/sec never quite reaches the real world, the speeds we do get will almost certainly make current technology obsolete.

Just like Wi-Fi, Li-Fi relies on available spectrum. The good news is there's a lot more spectrum available for it - in fact, the visible light spectrum is 10,000 times larger than the radio frequency spectrum.

While the radio spectrum, which supports Wi-Fi, is highly regulated, the visible light spectrum is not, which means the same licencing rules do not apply. The hope is that Li-Fi could alleviate the strain on the current radio spectrum and free up space for spectrum-hungry 5G.

Li-Fi offers a number of security advantages when compared to Wi-Fi. Because it relies on light, it's unable to travel through walls and doors - so access to the network can be controlled for more easily. It also doesn't create electromagnetic interference, so it can be used in places like hospitals and even in aircraft, where such interference might cause problems for equipment - and for people.

Its inability to move through walls and doors is also a downside of Li-Fi, as this reduces its range and increases the complexity of setting up a network. However, because it can bounce off surfaces rather than go through them, you can create a network that reaches every part of an office or home using strategically placed Li-Fi bulbs. Of course, the bulbs need to be switched on for this to work, but they can be dimmed below the level at which the human eye can see the light.

When will I get Li-Fi at work or at home?

The idea of Li-Fi is still fairly premature, having been first outlined nearly ten years ago in a TED talk by Professor Harald Haas, who invented the technology. Haas is now the Director of the Li-Fi Research and Development Centre at the University of Edinburgh.

Having said that, Li-Fi products are launching now faster than ever before, with a host of companies working on developing Li-Fi platforms and improving the technology, with some products currently available, including desk lamps and USB drives.

For example, PureLiFi has been launching products across Europe including the LiFi OFE, which is described as the first gigabit Li-Fi enabling technology, designed to be fitted into future generations of mobile phones.

FireflyLiFi’s Office SecureLink, meanwhile, is a device that can secure sensitive information shared over office environments using red, green, blue or infrared light for point-to-point connectivity. It’s used in indoor environments, whether an office or conference centre, to ensure the security and reliability of connections for several users.

Signify, meanwhile, is working on a system known as Trulifi, which modulates light waves to transmit data.

"With Trulifi by Signify, you get the double benefit of quality, energy-efficient LED light and a secure and highly stable, robust and fast broadband connection," the company explains on its website.

"As the world leader in lighting, we have leveraged our deep expertise in lighting for the Internet of Things and global footprint to offer this truly game-changing technology. With Trulifi by Signify light connects like never before and becomes a new intelligent language."

The LiFi Research and Development Centre, headed by Haas, is unsurprisingly also working on ways to develop products and systems based on Li-Fi tech. Should Li-Fi reach mass adoption, the office networking landscape may one day comprise a healthy mix of Wi-Fi, 5G and Li-Fi to support all kinds of data transfers, with connections rotating between these systems depending on the speeds and the range we require.