The wireless router that's faster than your ethernet connection 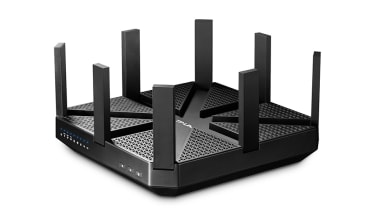 Wireless networking is hugely convenient, but it's lagged behind Gigabit Ethernet for speed - until now. The TP-Link Talon AD7200, bucks this trend, offering wireless performance that's nothing short of blistering. There's one simple reason for this: this is the first router to use the 802.11ad wireless standard, also known as WiGig.

Using the 60GHz band, this router has a maximum throughput of 4,600Mbit/s. This dramatically outstrips that maximum one-way speed of Gigabit, which is 1,000Mbit/s. However, it's fair to point out that Ethernet uses duplex networking technology, which means it can transmit and receive at the same time at the maximum speed. Wi-Fi uses shared bandwidth so that 4,600Mbit/s has to be divided between transmitting and receiving. Even so, all things being equal, the Talon should be able to outstrip Gigabit Ethernet under the right conditions.

Testing this kind of router isn't easy, as you need a device with an 802.11ad wireless network card in it, and there aren't many. However, integrated chipsets for phones and laptops have recently been developed, so the number of WiGig devices is expected to explode in the future. Fortunately, for this review, TP-Link provided us with a test laptop.

Running our usual tests on the router, we saw average throughputs of 717Mbit/s - the fastest wireless speeds we've ever recorded.This was tested by measuring throughput to a server connected via Gigabit Ethernet. As mentioned, the Talon AD7200 should be faster than Gigabit Ethernet, so we were actually limiting its speed (Gigabit Ethernet usually tops out in real-world tests at around 900Mbit/s).

At a previous demo, we saw a similar test being run between two 802.11ad laptops, with nothing to limit the available speed. Under these conditions, we saw throughputs of 1,700Mbit/s. Effectively, 802.11ad can replace a wired Ethernet cable and, in some cases, exceed the speeds.

That's the good news. The bad news is that the 60GHz band doesn't penetrate walls at all. Moving to the room next door to the router, we got no signal whatsoever. This makes 802.11ad a room-only solution, so it's better-suited for open-plan environments, such as offices.

For regular use, the Talon AD7200 has a traditional dual-band 802.11ac Wi-Fi network (1,733Mbit/s 5GHz and 800Mbit/s 2.4GHz). Here, we saw excellent throughputs on the 5GHz band, with 540Mbit/s at close range, 532Mbit/s on the first floor and 393.77Mbit/s on the second floor. MU-MIMO support should ensure fast speeds for multiple clients when available. The 5GHz results put this router near the top of the performance benchmarks, although the tri-band Netgear Nighthawk X8 (Shopper 345) is faster.

We found that 2.4Ghz performance wasn't quite as impressive, dropping off at range: we saw 86.9Mbit/s at close range, 79.13Mbit/s on the first floor and just 58.08Mbit/s on the second floor. That's a touch disappointing, and we'd like to have seen more consistent results. It's also a shame that there's currently no band steering on this router. So, if you're using 802.11ad and move to a different room, the Talon AD7200 will not switch you to a different, longer-range band.

TP-Link has used a neat design for the Talon. Its square body contains eight antennas that flip up around the router's edge, making it easy to set up and configure. Around the back are four Gigabit Ethernet ports for wired devices, and one Gigabit Ethernet WAN port, so you'll need to plug this router into a modem to get it online. There are also two USB3 ports for basic printer and storage sharing.

Configuring the router is done through TP-Link's web-based management page. When you first connect it takes you through a wizard, getting you to set a new admin username and password, as well as configuring the wireless networks. TP-Link's interface is best described as functional. It's not particularly pretty, but all of the options are pretty much where you'd expect to find them, ranging from port forwarding and smart DNS to guest wireless networks.

There's an IGMP proxy option in the router, which we were hopeful would work with YouView's streamed channels, such as BT Sport. However, our YouView box would not connect through this router, so it appears as though it will require a firmware update.

Hands-down the TP-Link Talon AD7200 is the fastest router that you can buy and, at 350, is not as expensive as we'd first feared. Its main problem is that 802.11ad's range is poor and there aren't enough devices. Currently, the Talon isn't a mainstream product and those seeking fast Wi-Fi for today would be better with the high-end Netgear Nighthawk X8 or well-priced TP-Link Archer C3200.

Incredibly fast, this wireless router shows what the future of wireless is, but the lack of devices and poor range hold it back.