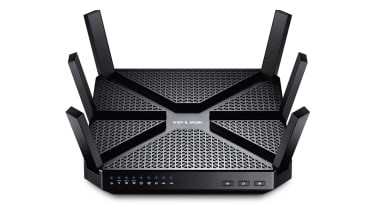 With so much kit in our homes reliant on a strong wireless connection, a tri-band router, such as the TP-Link Archer C3200 makes a lot of sense. This router has a single 2.4GHz network but can provide two 5GHz 802.11ac networks. It means that you can use one 5GHz network for streaming devices and one for your other devices, so that you won't suffer from Wi-Fi congestion.

Traditionally, tri-band routers have been quite expensive and, while not exactly cheap, the Archer C3200 is surprisingly well-priced: something that we've come to expect from TP-Link. Part of the reason for the lower price is because the Archer C3200 doesn't quite have the latest technology.

That means that there's no MU-MIMO (Multi-User MIMO) and throughput tops out a theoretical 1,300Mbit/s on the 5GHz channels. Admittedly, there aren't any MU-MIMO clients at the moment, but the technology looks set to become very exciting in the future.

With MU-MIMO, a router will be able to separate out different users, giving them their dedicated bandwidth, improving performance. Likewise, as support for faster than 1,300Mbit/s 802.11ac comes, this router will not be able to go faster.

That's not to say that the Archer C3200 should be dismissed out of hand, as it's still an accomplished router in its own right and there's a lot to like about it. We're big fans of its design, as it's one of the smallest tri-band routers that we've ever seen. Rather than having an ungainly mess of antennas, the Archer C3200's fold up from the centre of the router and are evenly distributed.

There are four Gigabit Ethernet ports round the back, which is the minimum that we expect nowadays, plus a Gigabit Ethernet WAN port. This means that you'll need to have a separate modem to plug this router into, as it can't connect to ADSL/VDSL connections directly. Finally, there's a USB3 port for sharing printers or storage over the network.

Out of the box, the Archer C3200 comes pre-secured with all of its wireless networks having security by default, and the network password is written on a sticker attached to the router.

Connecting to the router's web-based management page for the first time prompts you to change your admin username and password, and then takes you through the quick setup wizard to get you connected. In no time at all we had the router connected to our BT Infinity Connection.

Changing settings is pretty straightforward through TP-Link's web interface. It's a little plain, but all of the settings were where we expected to find them. Our first job was adjusting the wireless settings, giving the networks the names and passwords we wanted them to have.

The two 5GHz networks remain separate, with the first using the lower channels and the second using the higher channels, to prevent any interference. There's also an option to enable a Guest network, where users can access the internet, but they don't have access to your other devices: this is handy if you have a lot of guests around and don't want to give out your usual Wi-Fi password.

TP-Link has the usual range of features that you'd expect, including the option to share storage over the network. It's useful in some situations, but a full NAS is better. There's also web filtering to help protect your kids, although you have to fill out the whitelist or blacklist manually, which is a bit of a pain.

Once the router was working, our first test was to see if streamed channels from YouView would work, as this requires very specific IGMP support. First go, we could not get the channels to work. Following a firmware update, we managed to get the router working. Sadly, the first time we streamed a live YouView channel, the router stopped responding to our Wi-Fi clients, and we had to reboot it. This happened once more, but then the router settled down and became reliable.

Testing the router, we used the free TamoSoft Throughput Test, which measures Wi-Fi throughput from a client to server. At close range, we saw throughputs on the 5GHz band of 339.88Mbit/s, moving up one floor we got 307.51Mbit/s while sitting on the top floor of our house, we got throughputs of 319.69Mbit/s.

That's fast, although the router doesn't match up the Netgear Nighthawk X8, which is admittedly a lot more expensive. Moving to the 2.4GHz band, we saw throughputs of 124.94Mbit/s at close range, 111.3Mbit/s on the first floor and 114.84Mbit/s on the top floor. Again, this is pretty quick.

To push the router, we started two Netflix streams from wireless clients (one 4K and one Full HD) and then re-ran the 5GHz test from the first floor. The router managed a respectable throughput of 390Mbit/s. However, switching to the second 5GHz network, performance increased to 575.94Mbit/s: this shows the power of a tri-band router.

For a tri-band router, the TP-Link Archer C3200 is excellent value, but it is using slightly older tech. If you want to future proof with MU-MIMO and a faster Wi-Fi standard for future devices, and can deal with one 5GHz network, the Netgear Nighthawk X4S costs a similar amount of money but has a better web interface.

A great price for a tri-band router, but the C3200 uses slightly old tech and you might want to future-proof with a different model