A flexible NAS with great performance, a strong set of business-class apps and plenty of fast network ports 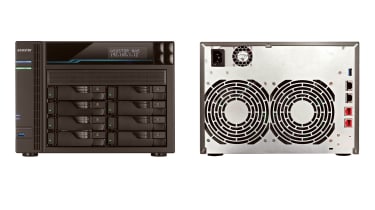 When it comes to network storage, Asus makes performance a priority. Its Nimbustor gaming NAS appliances were the first to offer dual 2.5GbE ports, and the Lockerstor models extend that attitude into the business space, presenting not just one but a pair of embedded 10Gbase-T ports, as well as twin 2.5GbE sockets.

We tested the Lockerstor 8, also known as the AS6508T. It’s an eight-bay desktop appliance powered by a 2.1GHz Intel Atom C3538 CPU. It comes with a generous 8GB of DDR4 memory, which should allow you to run a good few apps, and the two SODIMM slots can be easily accessed if you need more, allowing you to upgrade it to a maximum of 32GB.

With the lid off you’ll also notice two M.2 slots on top of the drive cage. These support both NVMe and SATA SSDs in the compact card format for high-speed caching duties.

To test the AS6508T, we installed four 16TB Seagate IronWolf NAS drives. Asustor’s Control Center tool quickly discovered the appliance on our network, allowed us to create a RAID5 array and installed the latest firmware. After this, the appliance is managed via the mouse-driven Asustor Data Master web interface, with easy visual access to all features.

For many businesses, the first port of call will be the Backup & Restore app, which provides a central location for managing rsync, FTP, internal, external and Amazon S3 backup jobs. Alongside it, the Cloud Backup Center app extends support to Alibaba Cloud, Microsoft Azure and Backblaze B2, while the DataSync Center app adds file syncing with Dropbox, Google Drive, OneDrive and Asustor’s own cloud storage service.

You have a few options for local data protection. If you use the Btrfs file system, you can take advantage of NAS volume and iSCSI LUN snapshots, which you can schedule as often as every five minutes. With this feature active, data recovery is a cinch: you can roll everything back to a previous point in time in a few clicks, or browse snapshots in the File Explorer app and restore individual files and folders. 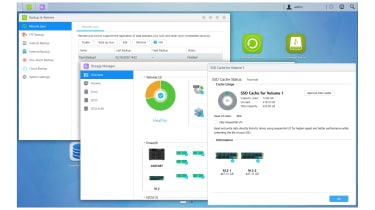 There’s also an unusual feature called MyArchive, which lets you format a spare hard disk from the Storage Manager app and use it as encrypted, removable media. It’s handy for storing backup data off-site, and for fast transfer of data to other Asustor appliances.

We tried this out by designating a 12TB IronWolf NAS drive as a MyArchive drive, and copying a selection of data to it using the File Explorer app. Asustor has sensibly kept its drive mountings consistent across the generations, so we were able to plug the drive straight into a seven-year-old AS-606T appliance, and immediately start grabbing data from it.

To test performance, we mapped a drive to a share on the AS6508T from an HPE ProLiant DL180 Gen10 Xeon Scalable rack server running Windows Server 2019. Iometer reported raw sequential read and write speeds of 9.3Gbits/sec and 5.5Gbits/sec, while our 25GB file copy returned real-world read and write averages of 5.1Gbits/sec and 3.6Gbits/sec. Our 22.4GB backup test folder was copied to the share at 1.3Gbits/sec.

Those are decent speeds, and connecting a second Xeon Scalable server showed that there’s headroom to spare for other clients: running Iometer on both hosts at once we saw cumulative read and write rates of 18.5Gbits/sec and 8.2Gbits/sec.

If you’re using 2.5GbE then naturally you’ll see slower speeds, but using these ports still gave us read and write rates of 2.3Gbits/sec and 2.2Gbits/sec. Our 25GB file copies completed at 2.3Gbits/sec and 2.1Gbits/sec while the backup test ran at an average of 1Gbit/sec.

If you’re looking for the fastest NAS around, you won’t find any other vendor offering dual 10GBase-T and 2.5GbE at this low price. Factor in easy deployment and management, plus a heap of useful data-protection apps, and you’re left with a very attractive appliance.