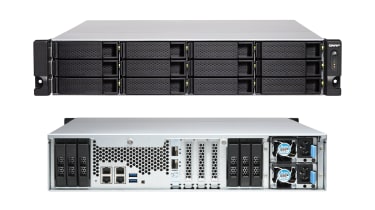 Qnap’s QTS storage software has traditionally offered a good choice of performance-enhancing caching facilities and the TS-1886XU-RP is designed to take full advantage of them. This 2U rack NAS appliance has 12 standard LFF/SFF SATA drive bays at the front and round the back and you’ll find 6 more SFF bays specifically for SSDs.

This makes the TS-1886XU-RP very versatile as with 18 bays up for grabs, you can dedicate the front ones to high-capacity LFF SATA drives and use the rear ones to present high-speed storage. They can be used for read or read/write SSD caches to accelerate I/O throughput or as a high-performance tier for Qnap’s Qtier 2 data migration feature.

Qsan’s family of 18-bay 2U rack XCubeNAS models offer strong competition and the closest in terms of price parity is the XN5012R. Two of its six SFF bays do support NVMe SSDs and it offers great enterprise-class data protection features but we found the TS-1886XU-RP delivers a number of key advantages.

The appliance has a quad-core 2.6GHz Intel Xeon D-1622 CPU in the driving seat which is over two years younger than the XN5012R’s dual-core 2.9GHz Celeron G3930. Another advantage is the base 8GB of DDR4 ECC memory in the TS-1886XU-RP can be upgraded to a massive 128GB.

The slots can also be used with Qnap’s SAS-12G2E dual-port expansion card which costs around £300 and allows up to eight 12-bay or 16-bay SAS3 external shelves to be connected. The other option is to use the appliance’s dual USB 3 ports to connect Qnap’s SATA rack expansion shelves.

Value looks even better, since the appliance also comes with dual 550W hot-plug PSUs included in the price. Internal design is very tidy making upgrades a cinch, although we found noise levels at close quarters of 64dB from the three cold-swap cooling fans somewhat intrusive.

We focused on SSD caching performance and installed three 16TB Seagate IronWolf NAS drives with four enterprise-class 1.92TB Micron 5200 Max SATA SSDs fitted at the rear. After creating a RAID5 array with the IronWolfs, we used the QTS Storage & Snapshots app to create an SSD cache and promptly ran up against restrictions imposed by the appliance’s memory.

The base 8GB of memory limits cache sizes to 2TB so we could only create a dual SSD mirrored cache with the Microns, as RAID10, 5 and 6 arrays would be too large. QTS supports a maximum 4TB cache size which will require a memory upgrade to at least 16GB.

For IP SAN testing, we added a second dual-port 10GbE card to the appliance, created a 1TB iSCSI target and presented it over a quad MPIO link to a Dell PowerEdge T640 Xeon Scalable server running Windows Server 2019. Caching has no impact on sequential read performance as in both cases, we recorded a top speed of 4,500MB/sec. 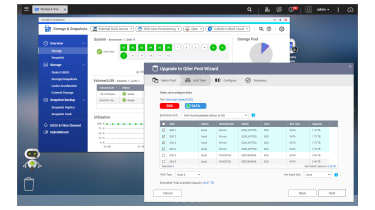 Dropping the Iometer block size to 4KB revealed a similar story where the biggest improvements came with random write operations. Without caching, we recorded a mere 1,300 IOPS which the SSD cache increased hugely to 55,400 IOPS.

Qnap’s Qtier 2 feature is also accessed from the QTS Storage & Snapshots app and this latest version allows you to upgrade an existing storage pool with an SSD tier. You can modify the tier whenever you want and delete it where the data is flushed back onto the standard HDD tier.

A wizard helps create a high-performance tier and unlike standard caching, there are no tier size limitations. It also offers enterprise-class migration services as the automatic setting moves data between the tiers during periods of light storage pool usage based on recorded usage.

You can create a manual daily schedule that determines when migration will occur and apply tiering on demand to specify which NAS shares and iSCSI LUNs are included. The File Station app can also be used to see which NAS shares have tiering applied and to directly access their settings.

Whether it’s tiered or not, appliance data still needs to be backed up and Qnap beats Qsan hands down as it offers far more apps. The free HBS (Hybrid Backup Sync) 3 app is Qnap’s star player, which helps you create a 3-2-1 appliance protection strategy in as few as four clicks. 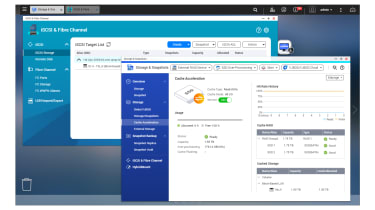 We think Synology’s Active Backup Suite is still the one to beat for features but Qnap makes further inroads as it is developing a separate backup app for protecting virtualized environments. Currently in beta testing, the Hyper Data Protector (HDP) app supports VMware and Hyper-V hosts and can manage backup schedules for securing selected VMs to a repository on the appliance.

The TS-1886XU-RP is ideally suited to demanding workloads that will benefit from SSD caching or tiering and our tests show it can make considerable improvements to HDD random write operations. Qsan’s XCubeNAS appliances offer a similar hybrid storage arrangement but the Qnap alternative is a lot better value, the QTS software provides a superior range of apps and the appliance is covered by a more generous 5-year warranty.