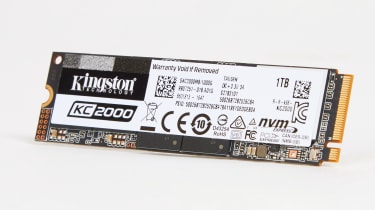 The KC2000 IS built for those who Kingston calls “power users” – workstation owners, PC professionals and anyone else who needs the full collection of speed, features and power. Provided they’re willing to pay a little more for it, of course.

Kingston has also constructed the KC2000 using a thoroughly modern 96-layer NAND design, based on the recent BiCS4 TLC memory from Toshiba, while the controller is an up-to-date Silicon Motion SM2262EN. The focus on heavy users is also evident in the endurance figures, especially in the 2TB model’s case: this can supposedly survive 1.2PBW (petabytes written). The other capacities are rated much lower but are still competitive in their class, with the 1TB model rated at a still-high 600TBW (terabytes written), the 500GB model at 300TBW and the 250GB model at 150TBW.

That’s all good news in theory, as the combination of high write speeds and intense workstation usage is one of the few that could feasibly degrade a modern SSD before its warranty runs out – though the KC2000’s five-year guarantee is pretty good in that regard as well. In practice, however, performance is more of a mix than the official figures would suggest.

Not just in a bad way, admittedly. In CrystalDiskMark’s sequential write test, our 1TB drive blazed to 2,782MB/s, nearly 400MB/s faster than that the specs suggested. It also edged past its read speed estimate, managing 3,250MB/s. 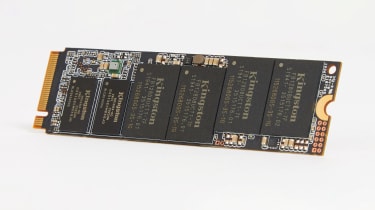 The KC2000 also fell behind in the large file test, ending up with a read speed of 1,181MB/s and a 1,240MB/s write speed. For most SSDs this set of results would be more than fine, but the KC2000 is a premium drive, and so the fact that both the 970 Evo Plus and A2000 are both faster – on read and write performance alike – only stands out more.

That said, it hit back – to its considerable credit – in the most difficult small file test. With an average read speed of 438MB/s and an average write speed of 503MB/s, it’s still significantly slower than the A2000, but it edges ahead of Samsung’s drive on read speed and handily beats the 970 Evo Plus’ write speed result of 414MB/s.

Still, anyone needing maximum performance out of their storage would be wiser to buy the A2000. Despite being cheaper, while it’s slower in sequential benchmarks, it’s consistently quicker in the kind of non-sequential jobs you’re far more likely to perform day to day. It doesn’t have a 2TB option, buts its 250GB and 1TB models also match the KC2000 on endurance, and its 500GB capacity is actually slightly tougher: it’s rated at 350TBW.

Luckily for the KC2000, though, it has a few tricks that could make it more suitable than the A2000 as a workstation and/or professional SSD specifically. The first is its superior security credentials. This is a self-encrypting drive that’s not only compatible with TCG Opal 2.0 security software, but has the rarer quality of eDrive compatibility as well. That means it will work with BitLocker, the full drive encryption tool included in Windows 10 Pro.

That five-year warranty also includes access to free tech support, so you might be able to get help fixing a seemingly faulty KC2000 without having to send it in for a return.

Most will still be better served by the A2000, but if you’re a home office worker or content creator looking to get serious with your PC build, the KC2000’s extra features could well be worth sacrificing a bit of speed.