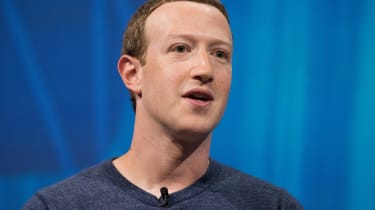 Facebook CEO Mark Zuckerberg is in the middle of a PR disaster following comments he made about Holocaust deniers in an interview.

Zuckerberg, speaking on the Recode Decode podcast, was asked about hate speech from websites like InfoWars and why it is still allowed on Facebook and the CEO gave an unprompted example of Holocaust deniers.

"I'm Jewish and there's a set of people who deny that the Holocaust happened," he told reporter Kara Swisher.

"I find it deeply offensive. But at the end of the day, I don't believe that our platform should take that down because I think there are things that different people get wrong. I don't think that they're intentionally getting it wrong."

The Zuckerberg's point that Holocaust deniers do not intend to impart false information attracted lots of criticism and the next day he emailed Swisher with an explanation.

"I personally find Holocaust denial deeply offensive, and I absolutely didn't intend to defend the intent of people who deny that," he wrote in an email that Swisher published on Recode. "Our goal with fake news is not to prevent anyone from saying something untrue but to stop fake news and misinformation spreading across our services.

"If something is spreading and is rated false by fact checkers, it would lose the vast majority of its distribution in News Feed. And of course, if a post crossed a line into advocating for violence or hate against a particular group, it would be removed. These issues are very challenging but I believe that often the best way to fight offensive bad speech is with good speech."

But his retraction came too late to stop widespread condemnation on social media and in the press, leaving the Facebook CEO in the middle of a PR fallout.

Last night, his sister Randi Zuckerberg, one of Facebook's first employee's and a leading figure within Jewish community organisations came to her brother's defence with a more coherent explanation of the censorship on social media in a statement to CNN Tech.

"While my brother could have chosen his words differently when talking about Holocaust denial on Facebook, I applaud him for being a leader at the forefront of navigating this incredibly difficult new world where the notion of free speech is constantly changing," she wrote.

"While it can be appalling to see what some people say, I don't think living in a sterile, Stepford-like online community where we simply press the delete button on the ugly reality of how people feel is helpful either."

Randi went on to say that she wished social media platforms didn't give a voice to anti-Jewish remarks, but silencing "selectively" would be far more "nefarious".

Randi's single statement has provided more clarification on a subject Mark Zuckerberg seemed to fudged twice, but it has been a week of tech CEO's PR disasters after Elon Musk called one of the divers who rescued the Wild Boars Football team a "pedo". The Tesla CEO came under heavy criticism and even saw his company lose value because of the tweet.